However, with the increase in the number of online services – and their relatively low variable costs – the number of these deals has drastically increased over the last couple of years.

While that’s not necessarily a bad thing, there are some issues with that.

Why Do Companies Offer Lifetime Deals?

The way that many SaaS companies grow is by spending large sums of money on marketing – on acquiring customers – upfront. Then, they hope those customers will remain subscribed to their service long enough to pay off for those marketing costs and also generate some profit.

That poses two issues to these companies – having to estimate the lifetime value of a customer over a long period of time and having to pay for the marketing upfront.

Just as an example, consider a company that offers an online photo editor for $10 per month. Consider that an average customer stays subscribed to the service for 6 months.

Now, let’s say that to get a single customer, the company needs to pay an average of $30 for ads.

With that, you can easily calculate that the lifetime value of a customer to that company is $30 (the $60 that the customer spends on subscription during the six months that he uses the service less the $30 the company spent on ads).

But, what if three months after you acquire these customers, a new competitor enters the market and steals some of your customers?

Your lifetime value will go down as you will have customers leaving your service earlier than expected. And, as a result, you will make less profit – or even worse a loss.

Or, what if you want to acquire another 10,000 customers?

Instead, imagine that you offered a lifetime membership.

Let’s say you would price it at $50 dollars – slightly less than the average customer above would have brought in revenue over six months. And, let’s say that you need to spend $35 on acquiring that customer – a bit more than acquiring a regular customer due to the higher price of the product.

Taking those numbers, the lifetime value of that customer is $15 – half of what it was in the case of a regular subscription.

However, unlike in the previous case, that lifetime value is set in stone.

You will not need to wait for the customer to pay in “monthly installments.”

Especially so, since the variable cost of providing an online service to a customer is generally very low. In other words, since the expenses that the company has to pay every month are not that different whether it has 10,000 or 1,000,000 customers.

The Life Expectancy of a Business and of a Person

If you read between the lines, you have figured out by now that when a company offers a lifetime deal, it sacrifices part of its profit for decreased risk. In other words, it might get a lower return on the money it spends, but that return is more certain.

How does that work for you as a buyer of one of these deals, though?

According to the U.S. Small Business Association, “about half [of businesses] survive at least five years.” Flip that around, and you realize that about half of businesses fold within those same five years.

On the other hand, the average life expectancy in most developed countries is close to or even above 80 years. That’s at least fifteen times longer than the lifetime of half of all businesses that are created.

Even if you assume you buy a lifetime deal when you are thirty years old, you are still expected to live ten times longer than half of the companies that might be offering the deal.

When the Definition of “Lifetime” Matters

After reading all of the above, you could – of course – argue that none of it matters. And, in most cases, I would actually agree with you.

After all, if you can get a service that you value at $10 a month for just $50 for “lifetime” – whatever that means – you better take that deal as long as you expect the company to be around for at least the next six months.

Anything after that is essentially a “bonus.

But, what if the offer is something like the below? In fact, seeing the ad below prompted me to write this post. 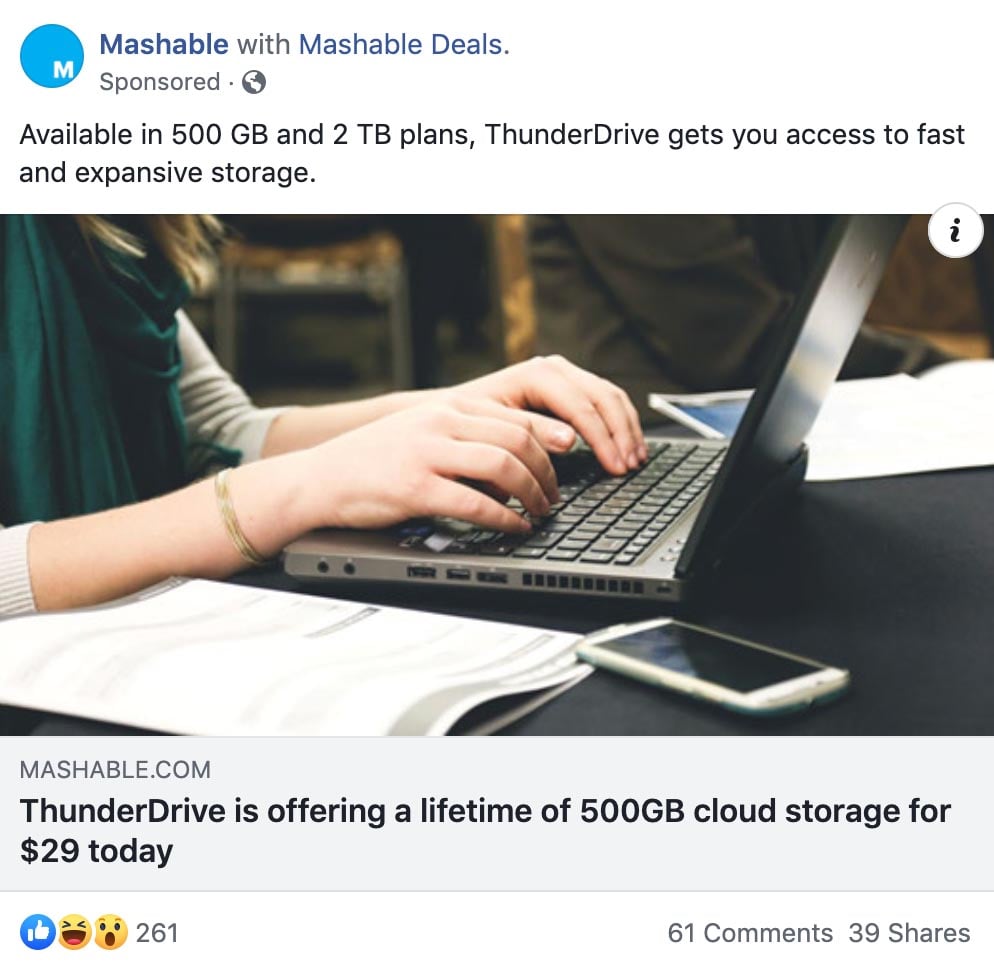 On the page of the deal, in the “important details” section, it only stated “length of access: lifetime.” It was as vague as any other similar deal.

However, rather than offering a photo editing tool or some other service like that, it was an offer for cloud storage. An offer for a service where people expect to upload something – whether an important business document or a family photo – and stay there for a lifetime.

Just like they expect a printed photo that is stored properly to last their lifetime – or even the lifetime of their children and beyond. Not the lifetime of Canon, Epson, or whatever company made the printer they used to print the photo.

On the other hand, when the company decided to put out this offer, “lifetime” almost certainly meant that of the company. Or the time until the company is acquired by some other company.

And, to be clear, I have nothing against that – however, I also think that it should be properly disclosed. Whether as “length of access: lifetime*” with a small print at the bottom of the page saying “* as long as we are in business or until we get acquired” or in any other way.

Am I saying that you should never buy a “lifetime membership” or similar “lifetime deal?”

Just be skeptical and understand that “lifetime” might mean anything including “a few months,” “a few years,” and – in some very rare instances – your actual lifetime.

Don’t bet on the last one, though, and be prepared to lose your “lifetime” access sooner than you think you might lose it. Even with that in mind, there are plenty of good “lifetime deals” out there.

Finally, if you are a company thinking of offering a similar deal, think it through. Think whether your variable costs are low enough to offer the deal sustainably and whether you can actually deliver the product you are promising for a long enough period of time.

Don’t use the strategy just as a simple way to raise money fast.

And, most of all, when it matters – like in the case of cloud storage – disclose clearly what the word “lifetime” means to you.