The other day, I decided to buy keishinukina.com to start a blog where I could share my non-aviation thoughts, etc.

While I’m not sure how often or what I’ll post here, I thought it would be nice to start with a list of the books I’ve read in 2018. 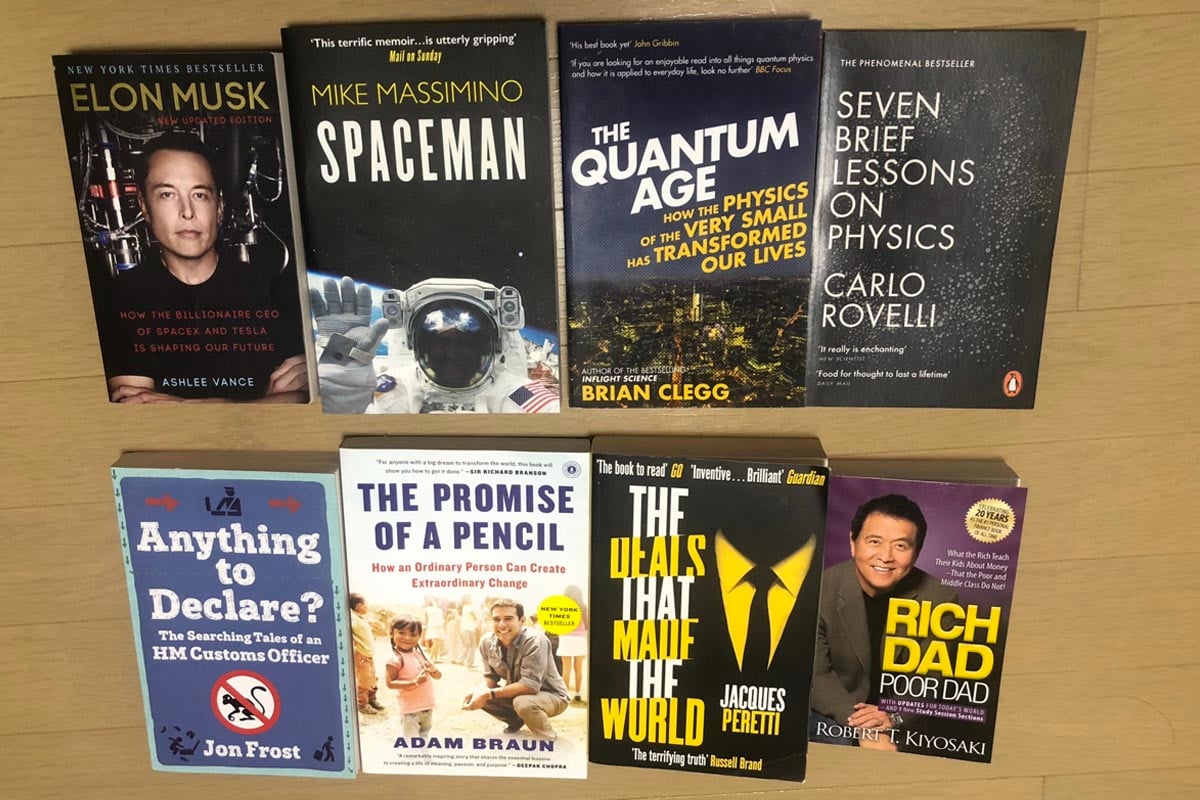 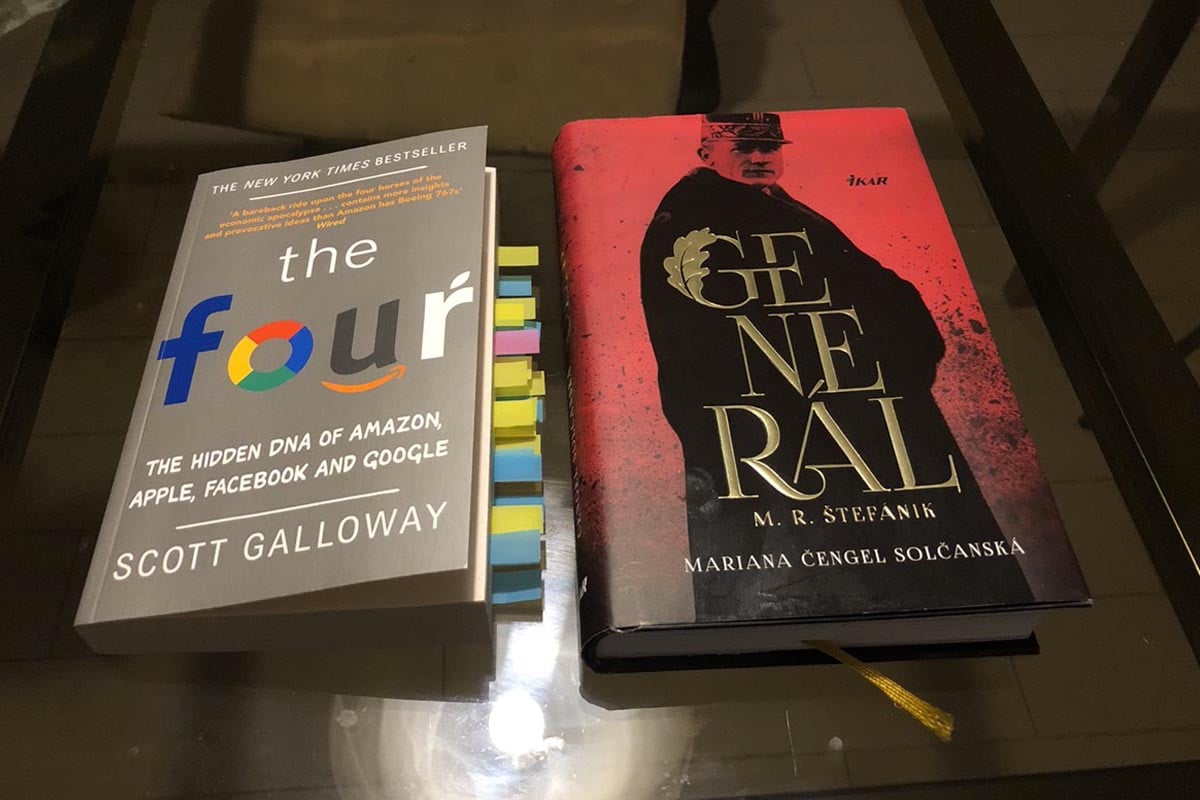 So what were they?

I’m typing this on an Apple laptop, inside a Google web browser. In another tab, I have my Facebook account open, and every month, I receive a payment from (and sometimes pay) Amazon.

And, I’m sure I’m not the only one that interacts with these “four horsemen” as Scott Galloway calls them on a daily basis.

The book explores how these tech giants slowly crept into our lives and got to the point where they are way more than just “big tech companies” and what the consequences – good and bad – of that are.

Whether you are interested in tech or not, I highly recommend reading this book. After all, Apple, Facebook, Google, and Amazon are a significant part of the platform that the current world is built on.

Having had the chance to fly onboard NASA’s SOFIA, and watching Chris Hadfield’s MasterClass about space exploration (re)sparked my interest in space and physics. This is one of the three books on this list that I read in 2018 as a result of that.

In Spaceman, Mike Massimino vividly tells the story of how he became an astronaut, of his two spaceflights (both to service the Hubble Telescope), as well as of his life after NASA.

If there’s one book in this list that I had trouble putting down last year, it’s this one.

I can only recommend picking a copy up – whether you dreamt of becoming an astronaut as a child, are interested in space, or are just looking for an interesting book to read.

The Promise of a Pencil (Adam Braun)

Pencils of Promise is a non-profit, or as its founder and the book’s author prefers to call it, a for-purpose organization that provides educational opportunities – through building schools and other programs – in the developing world.

I thoroughly enjoyed reading Adam Braun’s story of how one child asking him for a pencil in India set him off on a journey to start and grow the organization that now helps tens of thousands of children across three continents.

The book is divided into 30 chapters titled based on mantras the author lives by (why be normal, every pencil holds a promise, focus on one person in every room, etc.), each offering valuable lessons not only about running a non-profit organization but also about business and life in general.

Anything to Declare (Jon Frost)

I bought this book written by Jon Frost, a former British customs officer, as I thought it would be full of airport-related stories.

While in reality, only about half of the book took place at an airport, it was still a fairly enjoyable read.

Many of the stories about people carrying (or should I say attempting to carry?) all kinds of contraband across the British border were funny, bizarre, and eyebrow-raising.

That said, in some parts of the book, the humor seemed a bit forced resulting in me having to “force myself” to read through those passages.

If you are looking to brush up on your physics, you might want to start with this book by Carlo Rovelli, an Italian theoretical physicist.

In short seven chapters, some of the most important theories of modern physics – including Einstein’s theories – are presented in a fairly easily digestible way.

Seven Brief Lessons on Physics is perfect if you would like to learn about those theories and about how the universe works but are not interested in learning about the math behind all of it.

In The Quantum Age, Brian Clegg takes a look at countless examples of real-life applications of quantum physics.

Whether its items like computers and lasers or biological phenomena like photosynthesis and bird navigation, you’ll be surprised to learn the significant role quantum mechanics plays in your life and the world around you.

While there were some parts I had a trouble understanding (it’s quantum physics after all), it was still an enjoyable read.

Ashlee Vance paints a detailed account of his life from the time he was growing up in South Africa through the time he built his first company all the way to the point when grew the companies he is the most famous for – PayPal, Tesla, and Space X.

While (as you will learn in the book) he wasn’t the true founder of most of the companies he grew into multi-billion dollar businesses, there’s no denying that without Elon Musk taking control, the companies would reach nowhere near the point where they are today.

I heard about Rich Dad Poor Dad for the first time quite a long time ago. After all, it’s one of the – if not the – best known personal finance book out there. However, it wasn’t until mid-last-year that I actually grabbed a copy in the bookstore.

The book talks about Robert Kiyosaki’s two dads – his real dad who worked a regular job and his friend’s dad who was a business owner. Through telling stories about the different worldviews his two dads had, the book teaches basic lessons about financial independence and building wealth.

The lessons in the book are things that you likely already know if you read any blogs, listen to any podcasts, or watch any YouTube channels related to the topic.

In spite of that – and in spite of the fact that some of the lessons from the book have to be taken with a grain of salt – it’s still a timeless classic worth a read.

The Deals That Made the World (Jacques Peretti)

As its name suggests, in this book, Jacques Peretti looks at ten deals done by private businesses that profoundly affected the world we live in.

The book is a thought-provoking look at how decisions affecting millions of people are made by selected few individuals.

Two of the chapters that I found the most interesting to read were the ones covering the part food companies played in the Arab Spring uprisings, the part that governments played in the establishment of tax havens.

The other chaptes were an interesting read as well, though, and so I highly recommend reading the book.

The last book I read in 2018 was also the first Slovak book that I read many years (perhaps since high school).

I decided to pick it up as it tells the story of M. R. Stefanik – one of the people that greatly contributed to Czechoslovakian sovereignty and after whom the airport in the Slovak capital of Bratislava is named.

While the book is not – based on some of the reviews I’ve read – 100% historically accurate, it was still good to brush up on the basics of the history of Czechoslovakia since I wasn’t really interested in history when I was in school.

While I enjoy reading blogs, listening to podcasts, watching YouTube videos, and so on, rarely offer anywhere near the depth of information that a well-written book can offer.

Currently, I am reading Flying High – a memoir by Tony Fernandes, a successful Malaysian entrepreneur who is the founder of Asia’s first budget airline, AirAsia.

That will be followed by Support by Michal Truban – a Slovak entrepreneur, and Billion Dollar Whale, a story about the 1MDB scandal written by two Pulitzer-finalist Wall Street Journal reporters – Tom Wright and Bradley Hope. 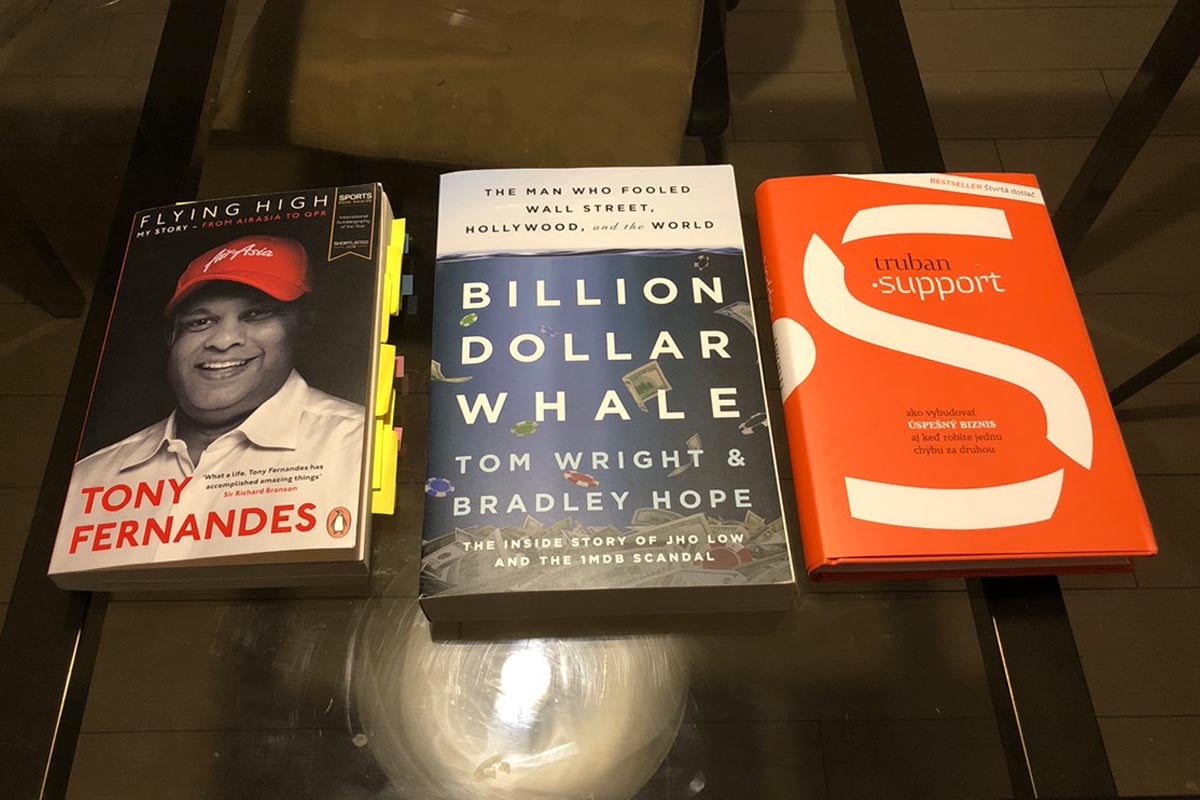 As far as the books I’ll read after that, I’m not decided yet. But, here are some that I’m considering picking up: